What do you do with leftover Coconut milk? Freeze it! It doesn't matter if its fresh or canned!

Here are some quick facts & answers

Can you Freeze Coconut milk?

The best way to freeze coconut milk is in ice cube trays. Which once frozen can be transferred to a freezer bag to save space.

Now that you know that coconut milk can be frozen, read on to understand what's the best way to freeze, defrost and use frozen coconut milk.

Coconut milk is the "milk juice" extracted out fresh coconut. It has been used for centuries in Indian and Asian cooking.

Today coconut milk is available across the world in below forms

If I had to choose, I would always buy coconut milk in cartons or powdered form. Not only do they have a very long shelf life, they are also easy to use.

Why we love Coconut Milk

I am married into a family from kerala. Coconut is the main stay of this south Indian state. There isn't a day we don't consume coconut in some form.

I use coconut milk when

My husband is from the southern part of India, so coconut is a huge part of his heritage and cuisine. It's something we use on a daily basis in curries, stews & desserts- like our Kerala Shrimp Coconut Curry or Kerala Vegetable Stew Recipe.

There is never a day when I don't have some form of coconut milk in my pantry.

Whether you are making coconut milk at home or using the store-bought version, chances are , that you open a can only to use about half of it. Especially if you cook for less than 3 people!

A lot of times, I open the carton of coconut milk to adjust the spice of a curry or just add some to my coffee. I only use some of the coconut milk.

The rest of it can be refrigerated. Though the shelf life of refrigerated coconut milk is about 2-3 days at max. In humid places, it gets spoilt very fast.

A better option, especially if you don't use coconut milk everyday, is to freeze it.

How to Freeze Coconut Milk

You could just chuck the opened carton inside the fridge and call it a day but it will be a nightmare to use later! Besides, it will develop freezer burn and not last very long.

So here are my preferred ways to freeze the coconut milk

Don't just use the freezer tray to make ice for your cocktails. You can use them to save leftover sauces, herbs and coconut milk!

Just pour the extra coconut milk in ice cube trays, once they are frozen, pop them in a ziplock bag or freezer bag.

This is such a great and easy way to store AND use coconut milk.

Another great option is this great portioned freezer tray. You can freeze individual portions. It's very convenient especially for curries and broth. Do this if you have opened a huge carton of coconut milk and you use is primarily in making curries and stews. 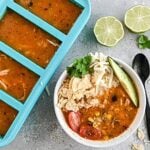 My go to containers are glass containers with air tight lids. I use them for heating, storing in refrigerator and in the freezer. They are very versatile and frankly the best investment in kitchen!

I have all kinds of sizes and shapes. This is also a great option to freeze leftover coconut milk.

Only, do remember to write the name and date of what you have frozen. You don't want to accidently add frozen white pasta sauce to your coconut curry! 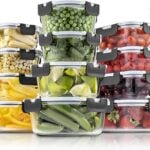 The other very easy and sustainable way is to use silicon bags. They can go into the dishwasher and can be re used. They take very little space and can be stacked as well.

You can also use a combination of ice cube trays an silicon bags. I like to freeze the coconut milk in small cubes which i later transfer to a silicon bag to save space. 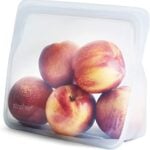 Or you could use regular ziplock bags. Though zip lock bags are the easiest option, they do make me very guilty. Even if you re use them, they cant be used beyond 4-5 times.

So I leave this option for only when I have no other way.

The short answer is yes.

When you freeze coconut milk, it separates. The fat settles down and the "water" stays on top. It freezes in a ombre manner so to speak.

When you defrost the coconut milk, it looks split. So yes the texture changes.

But its a simple matter of mixing it up again to get that creamy homogenous texture back. You can use a coffee frother or a hand held blender.

Yes..I admit it's extra work but its way better than letting that milk spoil in the fridge.

How to Thaw Frozen Coconut Milk

To use the coconut milk that you have frozen, you will need to bring it to room temperature.

Though you could add it frozen to your drinks if you want. It will work as an ice cube and coconut milk.

To add it to hotter stuff, desserts, dressings etc, you will need to thaw it.

There are several ways to thaw the chicken

All you have to do is shift the location of the coconut milk from the freezer into the fridge.

It will possibly take anywhere from 1-12 hours depending on how big the block of coconut milk it.

Thaw on the Counter

You can let the frozen coconut milk sit on the counter, in it's package. It will thaw and come to room temperature in 1-2 hours.

If you have frozen it in cubes, it will take about 15- 20 minutes only.

Though this is also a handsfree method, it is not a method suggested by USDA.

If you own a microwave with a thaw option, this is the fastest method. It's also a method recommended by USDA and considered safer than thawing on countertop.

Just place it in a microwave safe bowl. Microwave using the thaw setting for 1-10 minutes depending on how big the block of coconut milk is.

For coconut milk cubes, you will only need about 1 minute.

The oldest method to thaw is using the water bath.

To do this, Submerge the bag of coconut milk cubes or pouches in tap water. Let the water do it's thing for 10-30 minutes.

If your coconut milk block is large, you might need to change the water in the middle.

How to use Frozen Coconut Milk

So you did the good deed and froze all the extra coconut milk.Now what?

Dairy Free Iced Coffee - Use frozen coconut milk cubes instead of ice or milk to make your own iced coffee.

Alcoholic Drinks & Beverages - You can make Pina colada with frozen cubes of coconut milk as is. Coconut milk Margaritas and Mojitos can also be made using frozen cubes. But only if you are first blending them in a high speed blender with rest of the ingredients.

Overnight Chia Puddings & Oats- Just add enough water to wet the chia or rolled oats. Drop 2-3 cubes of coconut milk. Keep it covered overnight in the refrigerator. Give it a good mix and serve for Breakfast !! Here are 4 ways to make overnight oats for you!

For certain recipes, you will need to thaw and blend the coconut milk before using.

Curries & Soups - You could just add the cubes in the frozen form. But I suggest you thaw the frozen coconut milk , blend it in a blender or using a milk frother and then add it to the curries.

Rice & Pilafs - Add frozen cubes straight away. But only if you now what you are doing.I like to thaw and blend the frozen coconut milk before using in these recipes.

I know the popular advice to not freeze thawed food. The reason behind this is that first it changes the texture of the bonds of the food. And the second reason is that certain thawing techniques introduces bacteria to the food making its life in the freezer questionable.

Though you can re freeze coconut milk that's been slow thawed in the refrigerator overnight.

HOT TIP- If you have no other option than to throw the milk then consider washing your hair with it.

Here is my list of the best sources of coconut milk.

Freshly made coconut milk is arguably the best kinds. It requires freshly opened coconut flesh, a high speed blender and a strainer. It takes effort, time and its messy too. But this is by far the best kinds- 11/10 in points!

But the shelf life in the refrigerator is just 3-4 days.

Store- bought Fresh Coconut milk is the next best alternative but the shelf life is always questionable.

Canned Coconut milk or Coconut milk out of a carton is the easiest and most widely used kind of coconut milk. The only flipside is that once opened its shelf life reduces to 3-4 days in the refrigerator.

Coconut milk Powder - Just mix coconut milk powder in warm water and blend it for a uniform texture. This is a great option because you can make the coconut milk as thick as you please. Plus there is less wastage because you make as much as you can use.

But the taste and texture are not as good as the fresh or canned versions.

Frozen Coconut Milk - Whether you have frozen fresh coconut milk or canned version, frozen coconut milk is last on my list for a reason. Not only is the taste muted but the texture is also different.

How long will coconut milk last

Fresh Coconut Milk - 3-4 days in the refrigerator. About 5-8 hours on the counter. Lesser in hot and humid places.

Canned Coconut milk - The unopened cans and cartons can last for years or upto their expiry date on the packaging. Any can or carton thats puffed up, has been compromised and is not safe to consume.
Opened canned milk will probably last anywhere between 4-7 days in the refrigerator.

Powdered Coconut milk - This will last for years or upto their expiry date on the packaging.

Hydrated Coconut milk powder(mixed with water) will probably last anywhere between 4-7 days in the refrigerator.

The easiest way to tell if coconut milk has gone bad is by smelling it. It will smell sour and rancid. Gone will be the sweet mellow coconut smell and it will be replaced with curdled milk smell. That's when you know that its not to be consumed

Here are some coconut milk recipes that we love