I have been making Japanese CheeseCake for about 4 years now.I am updating the recipe in this blog post.Read my older post here. Every year, this is the one and only cake my husband asks for during his birthday.

He isn't a chocolate eater, doesn't fancy cakes and cookies but a Japanese Cheesecake is something he never wants to share with anyone.Every time I bake this, I get specific instructions not to offer it to anyone and not to tell the guests about it.

Over the years,I have changed the recipe slightly - added a bit of Cream of tarter to help with the egg whites and doubled the quantity cause who doesn't like tall cheesecakes!But otherwise it remains fairly unchanged.

Japanese CheeseCake is made with Cream Cheese,Eggs and Cream with a little bit of flour added to help it stay together. Unlike a Philadelphia Cheese Cake,this is a light and fluffy Cheesecake.

The reason it is lighter than a traditional cheesecake is because the egg whites are whipped to stiff peaks and folded gently into the rest of the ingredients.

Eggs whites actually enjoy a monopoly in being the most versatile ingredient the dessert world. What would we do without it? Imagine if egg whites didn’t react the way they do?!The whole dessert world will come crumbling down!! You might talk about the new age substitutes. But they are essentially a replica of the age old whipped egg whites.

I use a hand whipped to beat up the egg whites, though seasoned bakers can achieve it with just a whisk and a bowl.I prefer to leave the heavy work to my humble hand held mixer instead.

How to Whip Egg Whites Easily

First, Separating eggs is not as easy as most TV programs lead you to believe.If you end up with even the slightest bit of yolk in the egg whites, be sure that they will not whip up to stiff peaks.

The best way to separate eggs is to use cold eggs, break the egg with a sharp knife and use your hands to let the egg whites slip from your fingers into a clean bowl, leaving the egg yolk intact.

Prepare all the other ingredients in another bowl.Let the egg whites come to room temperature and start whipping them gently.Do not use the highest speed cause then the air bubbles will be too big and collapse faster.Once the eggs are foamy add the sugar ½ teaspoon at a time while you keep whipping.At the soft peak stage, add the cream of tarter and keep whipping till you get white, shiny stiff peaks.

Cream of tarter helps get the stiff shiny peaks faster but its not an ingredient thats absolutely must.You can skip it if you don't have it on hand.

Your Guide to the best Japanese CheeseCake

Unlike baking a cake, a perfect cheesecake needs certain specific tricks and tips.Controlling the temperature is of the utmost importance while making a cheesecake.

The temperature is kept low- at 150 degrees and the cheesecake is baked in a springform pan whose sides can be removed easily.While baking, the cake pan is kept inside a water bath-also called as Bain Marie to make sure the moisture is maintained inside the oven and the temperature rise is steady.

Once your cheese cake is baked to perfection, it has to be left inside the oven to come to room temperature slowly.Any sudden drop in temperature will lead to a crack on top which you want to avoid.

A Japanese Cheesecake needs to be refrigerated for at-least 3-4 hours before consuming.Cooling the cake enhances its flavours and amplifies up the sugar. 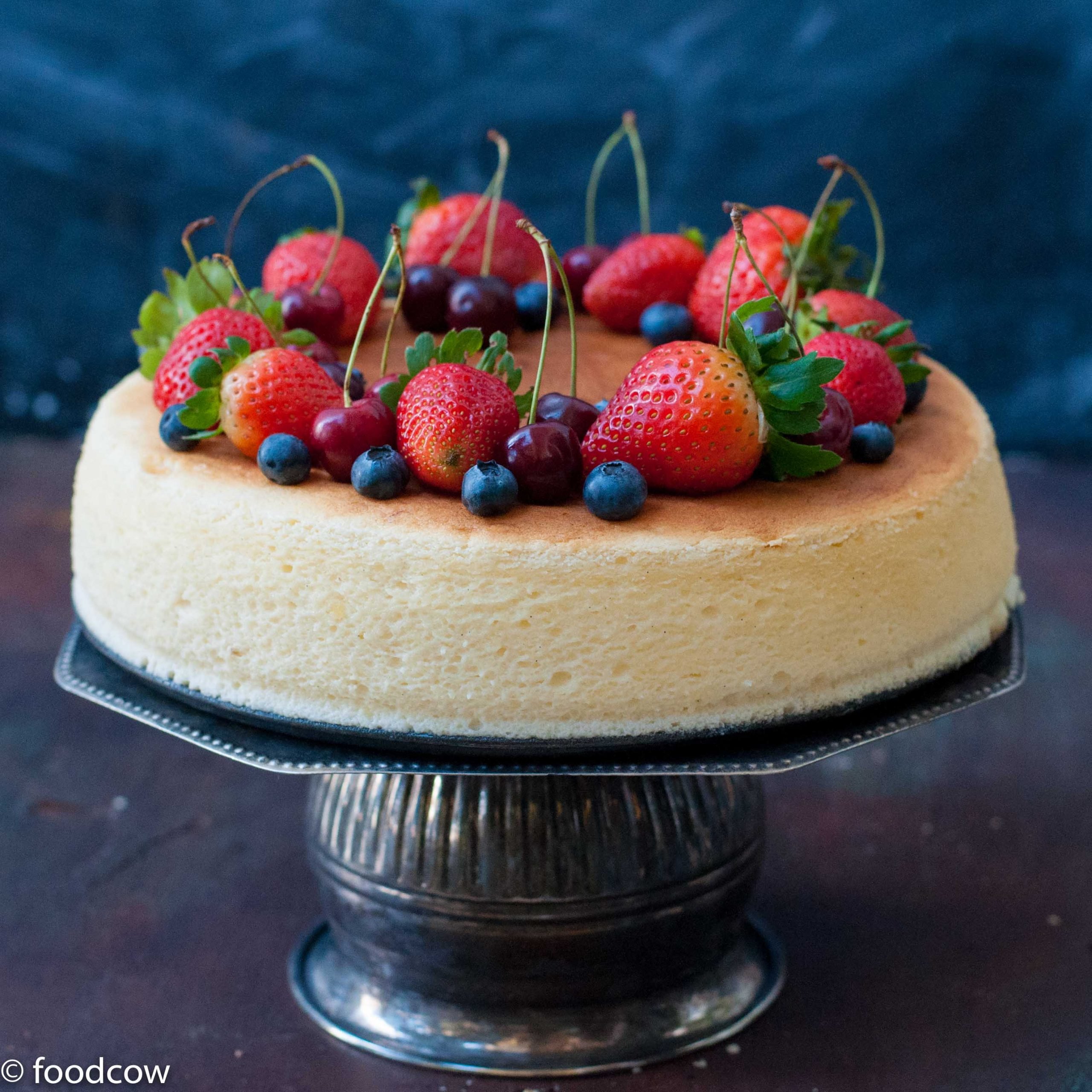 Use a 9 inch Pan with at least 3 inch height.The cake rises a bit while baking.
You might see some streaks of egg whites in the batter- which is okay.
If you liked the recipe, please leave us a rating
5 from 3 votes
Follow me on InstagramMy handle is @yellowthyme

Our Other Favourite Cakes