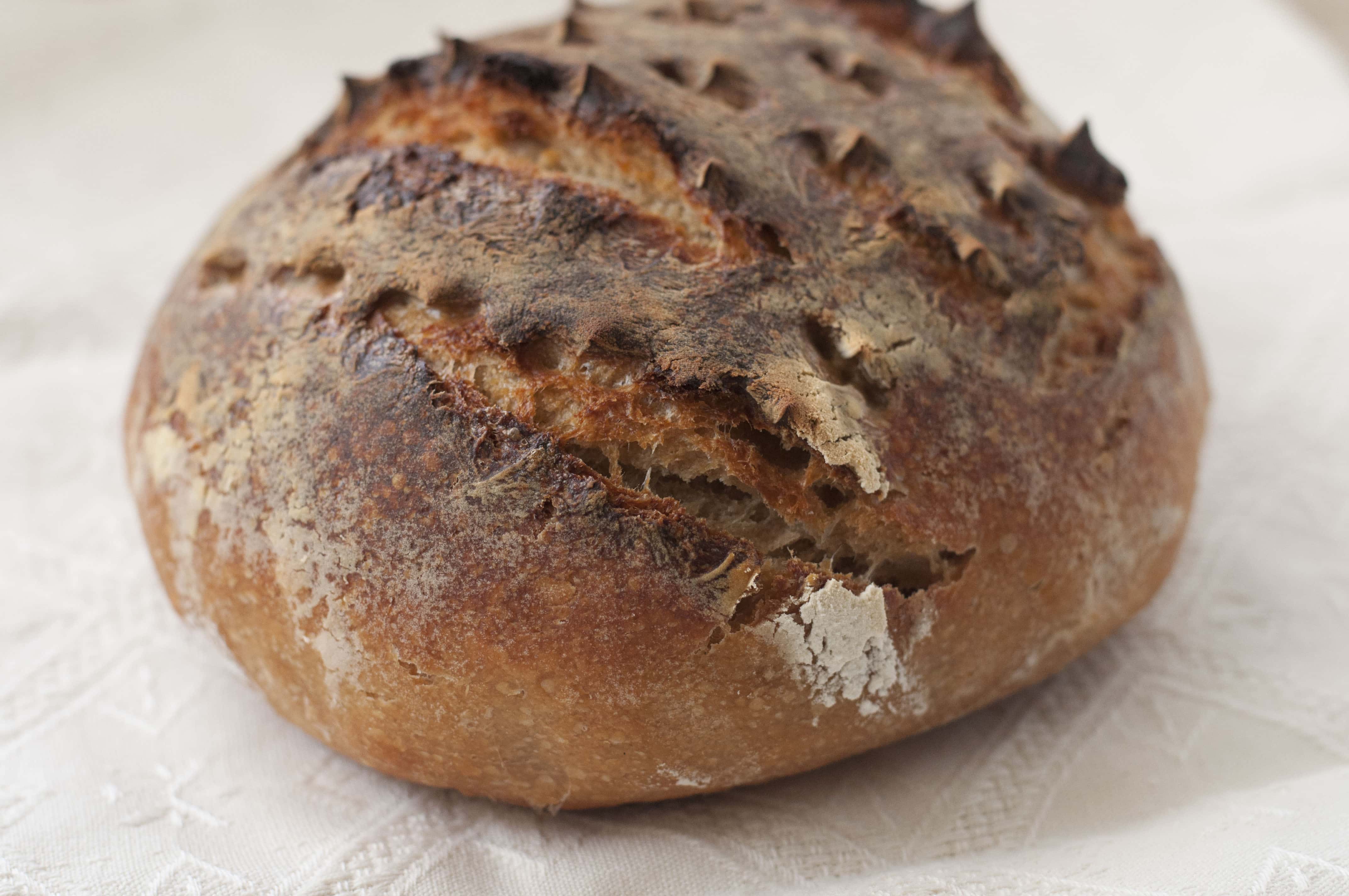 I won’t presume to act all knowing about bread baking. In fact this was my first attempt and rather than tell you how to bake a sour dough bread I am just recording my experience in this post. I followed theperfectloaf blog almost entirely for making this sour dough bread.

This is my first successful attempt at bread baking with natural or commercial yeast. I have tried to bake bread a few times with the commercial yeast which has been a disappointment almost everytime and ended up in the dumpster but this time using natural yeast I was able to make a bread with a great crust & caramalization, crunchy exterior,soft & fluffly interior and a subtle sweet yeast flavor.

Though I have tried to follow the process documented in the perfectloaf blog I had to make a few changes like the kind of flour and the usage of Dutch oven. I have used ashirwaad multigrain flour, which we use at home for making our everyday rotis (flatbreads) and allpurpose flour which is also called maida in india in 50:50 ratio.

The bread has 67% hydration which means the ratio of flour to water is 100:67. These are the only two ingredients other than salt and water, which have gone into the making of this bread- all purpose flour and Multigrain Flour.

Let me start by explaining what Sour dough Bread is-It’s a hearty bread made from natural yeast harnessed from the environment. The bread is not sour in taste but has a very subtle sourness if done right.

The fundamental is that flour and water kept together for an extended period of time ferment and give way to a natural yeast which is used to making bread. This is essentially the starter, which becomes stronger as you feed it overtime. These starters can be bought or you can make it on your own. I have made my own over the period of 10 days.

-Create a Levain from the starter (12 Hours)

First thing to do is combine 500 gms of all purpose flour and multigrain flour together in a jar for future use.

Mix the two together and store covered in a slightly warm place for 24 hours.

Day 2-One Feeding per Day

Remove enough flour and water mixture from the jar so that only 40 grams of the mixture is left in the jar.Add 40 grams each of flour and water and mix enough so that there is no dry flour left.

So that’s basically formula is

At the end of day 2 you should be able to see some bubbles or air pockets in the starter. This means that there is some yeast activity present.

Now repeat this process for 5 days.

On the day 6 ideally the starter should be strong enough to have good amount of air pockets in it.Now you will have to feed every 12 hours. Do this as soon as you get up and before sleeping.

Repeat the process on Day 7 and 8.

The starter can be stored infinitely in the fridge with weekly feedings. The older the starter the stronger is.

Create a Levain from the Starter

Now you have to prepare a levain. Which is basically using the culture you have created in the starter to create a bigger batch which will be used to ferment the whole dough.

The starter will be stored and maintained for future sour doug breads and the levain will go in with the bread in the oven.

Ingredients for the Levain

Combine together and Keep in a covered bowl overnight.In the morning it should show as much activity as your starter shows now.

This process involves making the dough by combining the levain, flour ,salt and water and folding it multiple times to give the desired dough for the bread

Ingredients for the Dough

Repeat the step 4 and 5 four times-Every 30 minutes pull the dough from underside,stretch and fold in all directions-North,South,East,West.

At the end of 2 hours you would have done this four times with 30 minute intervals. Now rest the dough covered for 2 hours. The dough ideally rises by 20-30 percent during this time.

After the two hours of rest its time to preshape the bread. I have made a boule, which is a smooth round shape with flat bottom.

Now flip the dough. This would be your “nice” side and the seam should be below.

You can increase the surface tension of the dough by tucking the sides under more.(This would be a sort of cupping action).

Prepare your proofing basket. Line it first with a kitchen towel. Sprinkle it with lots of dry flour literally covering it fully with a film of flour. Carefully transfer the nice side down.The seam would be facing the top.Cover with a lid or cling film and let it bulk rest in the refrigerator for about 17-18 hours.

Carefully transfer the bread seam side down on a parchment paper cut the size of your pot which you will use for baking. (You can keep the parchment paper on the bowl you have the bread in and just turn it over.)Scour the bread with a blade. The scouring is done so that the steam has a place to escape the bread instead of erupting from some other weak point on the bread.I didn’t have a blade at hand and hence used kitchen scissors to score with not so great results. I will definitely use a blade next time.

Ideally this should be done in a dutch oven or a utensil or pot which has a lid and can withstand high oven temperature. This is important because in the first 25 minute of baking the bread at 250 degrees the yeast basically goes overactive and the bread rises to the maximum level possible. When this happens the oven temperature can leach the water content from the bread making it too dry in the middle.

I do not own a dutch oven.One possible solution to this is to use an earthen pot with lid which is usually available in most indian houses. My pot didn’t fit inside the oven and it is also rounded from the bottom. Other options are to use a cast iron skillet and cover the top with aluminium foil or a bowl.I used my springform pan to cover my skillet cause it also gave a good height to the bread allowing it to rise.

The next two sets of baking are to be done open. The bread should almost look burnt from the top and should also have a healthy dusting of flour on it.

Take out the bread from the oven and let the pan cool. Transfer to the wire rack. Its suggested that the bread should be cut at least 1 hour after baking though I couldn’t resist.

I noted the following things in this bread

The bread had a great crust and caramalisation

The scouring could be better.Will use a blade next time.

The flour used was not very strong and hence the gluten didn’t form well. Should get bread flour or add gluten to the flour as suggested by a friend.Will try only maida or all purpose in the meanwhile.

Next baking milestone is for me to try my hand at sourdough pizza and sour dough cinnamon buns.

Do comment if you have a question Cancel reply

Hi there!! I am Chhavi