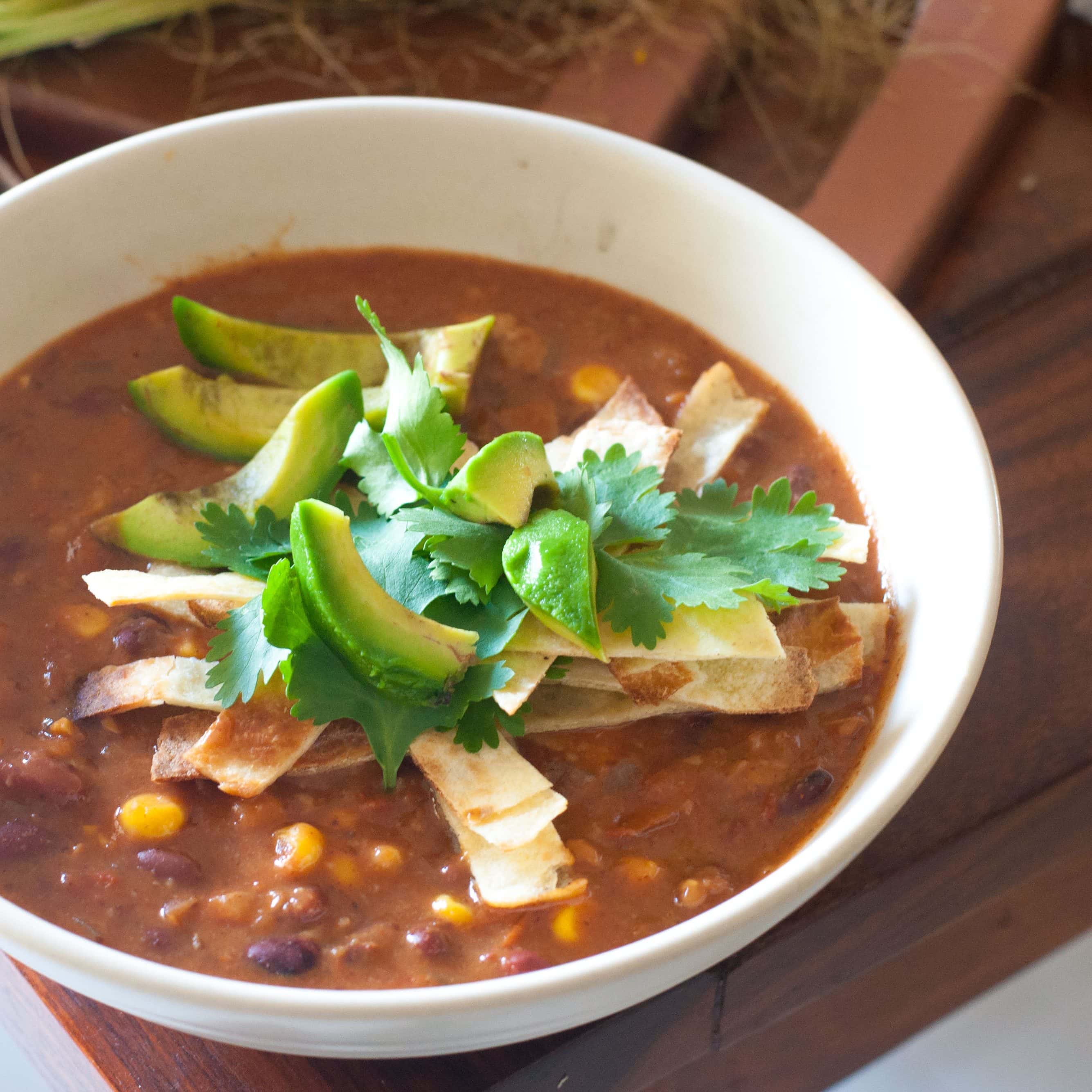 I feel great exhilaration in naturalizing recipes from different countries.It invigorates me, especially when I use what’s locally available here in India.This Vegetarian Mexican Tortilla Soup is one such recipe that I have adapted to make it easy to cook in an Indian kitchen.

Indian food resembles the Mexican cuisine pretty closely in its use of tomatoes,cilantro,onions,cumin,cilantro.The base onion tomato sauces from these cuisines have a lot of overlapping ingredients and resemble each other in both appearance and taste. In fact Indian flat breads are made with Wheat and a very similar flatbread is made with cornmeal in Mexico and very famously called the Tortillas.Both the cuisines are very bold on flavours and heat. Definitely not a food for the faint hearted.

These similarities are not merely incidental but stem from the fact that there was extensive trade between both the continents in 17-18 centuries because of the Portuguese and Spanish merchants.In fact the beloved chillies of India are not really Indian at all…They are all actually a gift which the Portuguese bought to our country from Mexico through Goa..And those Kidney Beans which grace every North Indian Party are also not of Indian origin.These beans have also been bought all the way from Mexico.

As you go through the recipe below you find a lot of steps that are almost identical to how we make our base sauces and soups.When I first presented this to my husband he looked at me dubiously and asked me why I was giving me Rajma?Cause I never do.He doesn’t love and appreciate a good Rajma Masala as it should be appreciated, so I almost never offer him any when I make it.

Vegetarian Mexican Tortilla Soup can be made from everyday ingredients like onions,tomatoes and Rajma.The tortillas I have used are corn tortillas from a brand called Deli Sun.You can use Tacos also with the same effect and skip the step where I crisp up the tortillas.In a pinch you can also use good old rotis for this.

The only thing not essentially indian I have added here is Chipotle Chilli.It’s not one of those ingredients which you will buy and not end up using.I swear to you it will enrich your pantry in ways you could not have imagined.Though smoke plays an important part in indian cuisine we don’t have a ready to use ingredient that can add the smoky flavour to food instead of actually cooking it in a tandoor or flavouring it with artificial smoke.This chilli will give you that smokiness.Chipotle chilli is a form of smoked dried jalapeno.

It’s easily available on naturesbasket,bigbasket and amazon.I have used Sprigs Mexicon Chipotle chilli powder and it really changed my world.I have added it in my taco mixes, in my rice and also some of my curries.In my view its a powder packed pinch of Mexico,a little of it goes a long way.It instantly transforms the dish and takes it from everyday indian food to saucy Mexican decadence.

If you can’t find chipotle chillies, you can use tabasco or any other type of smoked chilli too but I strongly urge you to try out chipotle.It is life changing.

To make this Gluten free omit the tortillas and use gluten free tortillas instead.You could also change up the red kidney beans with white cannaeloni beans or larger rajma available in India.

Serve this with a dollop of sour cream if you have on hand or nicely whipped thick yogurt will also work very well and contrast against the spicy earthy Tortilla soup.

Amp up the protein with some boiled chopped Chicken breast in the soup and make it into a nutrient heavy meal.

The Soup is vegan(hence Vegetarian) as it uses no animal products or milks.In fact its a great vegan complete meal.You can supplement the soup with a dollop of coconut yogurt instead of a animal milk yogurt.

The Tortilla Soup is not whole 30 or paleo approved because it has both beans and Tortillas which are against the grain free tenet of the whole30/Paleo philosophy.

How is this Vegetarian Mexican Tortilla Soup Almost Indian

Any North Indian worth his/her salt will tell you that Rajma is Punjabi invention(its not!).It’s literally flowing in our blood! A normal supermarket stocks at-least 7 types of Kidney beans (Rajma),even in the most southern part of India.Rajma chawal has been a quintessential Sunday special food in our household since I can remember.My fondest early food memory is of eating Rajma Chawal in Jammu while visiting Vaishno Devi.

This soup is almost the Rajma Curry with a little twist of corn and chipotle in it.I am not counting tortillas as something foreign because I remember my mom giving us a giant bowls of rajma with torn up rotis as dinner very often.

So here you go..This Mexican Tortilla Soup is actually an Indian Rajma Curry made in a slightly different manner with rotis.

-To Boil Rajma-Soak the rajma in water for 4-6 hours or overnight.Pressure cook it with 5 times the water.So if the dried Rajma is 1 cup, use 5 cups of water to cook it.
I use small rajma for this because it cooks faster.
-You can add shredded Chicken and other vegetables to this soup too.
crisping the tortilla can result in a burnt mess if you don't keep an eye on it.This has happened to me several times.
-You can use the store-bought tacos for this soup in a similar manner if you can't find corn tortillas.
If you liked the recipe, please give it 5 stars and leave a comment below.
3 from 1 vote
Keep in TouchFollow and like my facebook page yellowthyme!
Mexican Tortilla Soup

Other soups on the blog that you will absolutely love!

Do comment if you have a question Cancel reply

Hi there!! I am Chhavi