This Amazing Kolrabhi and Apple Salad showcases the under achievers of the vegetable and herb world.If you aren't already a fan let me introduce you to this vegetable called Kolrabhi. Chances are if your mom didn't cook with it you probably don't either,atleast I didn't till I read somewhere that it's the vegetable of the year 2018!I was intrigued…cause first it's so easily available in india that it didn't seem like a vegetable worthy enough for that kind of stature and second cause it looked so..lets say plain Jane sorts.

The more I read about it the more it the more I was sold on it especially cause I am not a big fan of cruciferous vegetables.I find broccoli a chore and cauliflower seems to be the elixir everybody keeps promising but I cant get the taste right.Though I love gobi Manchurian…Ask anyone! But that aside..Cauliflower pizzas and bites haven't been all that successful in my house.

I have seen this humble vegetable all my lifeline almost every part of India but never picked it up.It's known by many names throughout the India- In Bengal its called Ol Kopi,in Kashmir its known as Monj-Hakh,North India-Nol Kohl,Maharashtra-Navalkohl,Karnataka-Navilu Kosu. My mother calls is Gaanth Gobi.She never made it at home so it never ended up in my kitchen.

When I tastes this salad I was instantly amazed at how great this vegetable tastes raw.Some people describe it close to an apple but without its sweetness.It's got all the good bits from cauliflower and brocoli.It's slightly sweet, super crunchy and has none of that pungency usually associated with a cauliflower.

It's such a beautiful understated vegetable from the cabbage family.It's got all the good things from the cauliflower,turnip and broccoli. The best way to describe it would be a cross between the cauliflower stem and a turnip.Its Crisp,slightly sweet,way less pungent than other vegetables in the same family.

For this salad,I have sliced it very thin along with an apple in my food processor but you can use a sharp knife or a mandolin to get thin wafer like slices of it.I only had green apple in hand but a red apple will also work and give it the colour this salad is otherwise lacking.

The dressing is as simple as it can get with just yogurt, little oil and fennel.Fennel is also a very easily available, underrated herb which gives a very mild aniseedy flavour to the dressing.I use fennel in a lot of my Indian cooking like akki roti,upma and parathas. 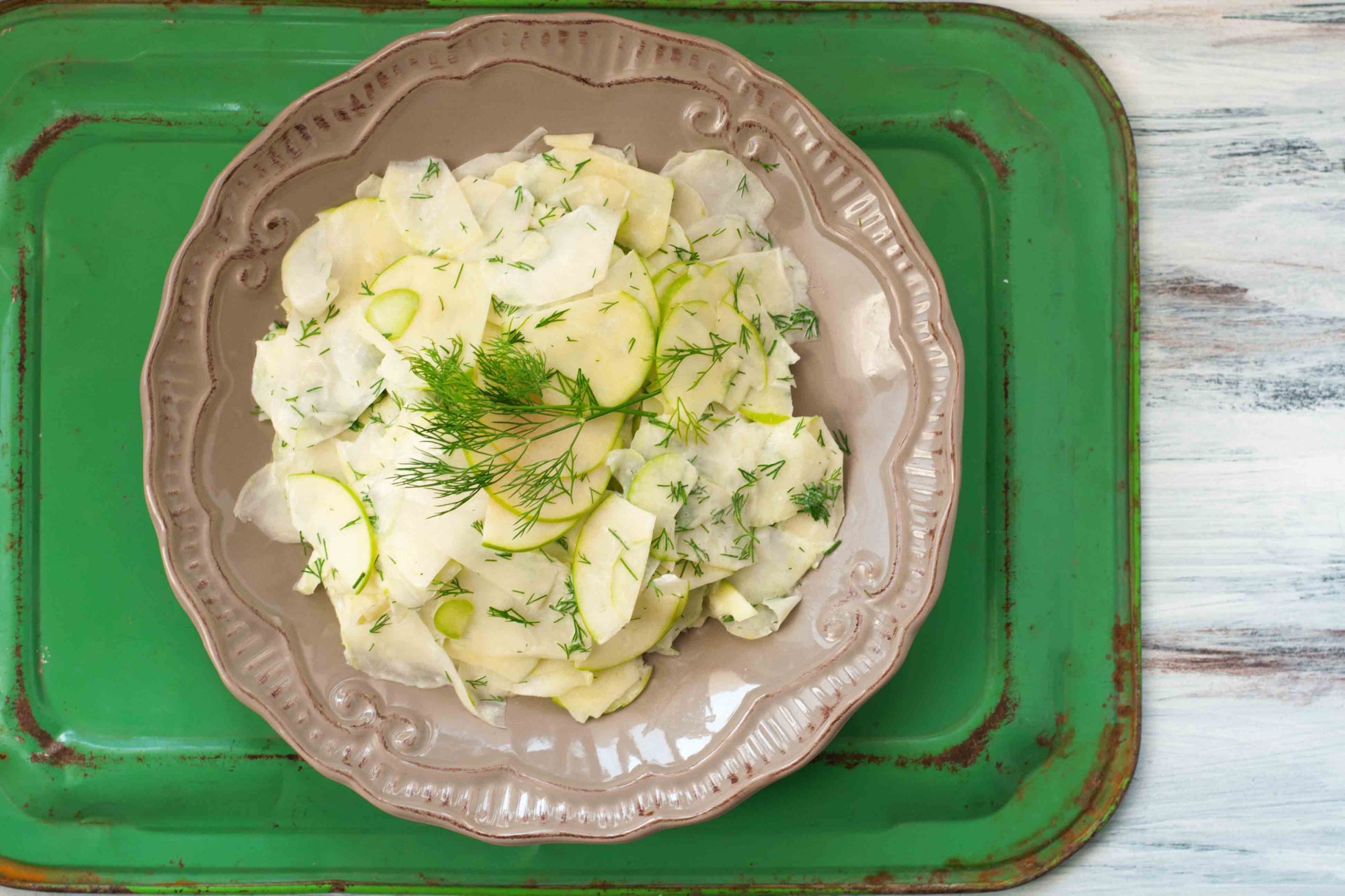 If serving later, let the apple and kolrabhi rest in the ice water.Mix with the dressing just before serving.
If you liked the recipe, I would appreciate a comment.
Keep in TouchFollow and like my facebook page yellowthyme!

Some more Kickass Salads you will enjoy